In their recent work members of the Neupert group extend the paradigm of topological insulators to areas which were previously thought to contain only trivial insulators. 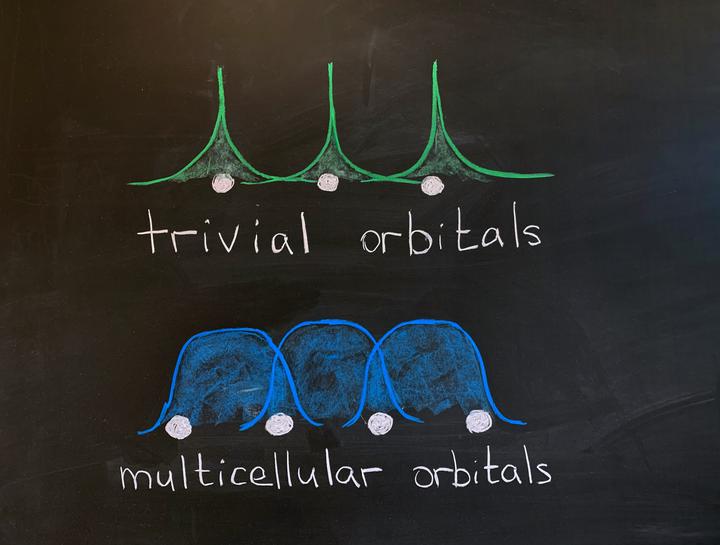 An accepted way to distinguish trivial and topological insulators is to check whether their electron ground state could be decomposed into local orbitals. These could either be the atomic orbitals of the constituent elements, or their quantum-mechanical superpositions known as Wannier orbitals. If a given insulator has such an orbital representation, it was deemed trivial. In contrast, when such a description is not possible, the insulator is topological and typically exhibits metallic states on the boundary, despite being insulating in the bulk.

A recent theoretical work published in Physical Review Letters [1] now reveals that even the insulators that are decomposable to local orbitals are not all equally trivial. The authors reach this discovery by introducing a new family of insulators which admit such a decomposition but at the same time possess a quantized topological invariant. They call such insulators multicellular because each of their Wannier orbitals necessarily spreads over multiple unit cells.

For the studied family of topological insulators, the authors report that addition of a trivial band to either the valence or the conduction bands can trivialize the entire system. Such topological systems, here named delicate, extend the previously established notions of stable and fragile topological insulators. Some systems, which were previously shown to host such phenomena as higher-order topology, axion magnetoelectrics and quantized surface magnetism, are to be considered multicellular and delicate according to the suggested classification. As a first step towards a concrete material realization, the authors discuss the crystalline symmetries compatible with the presented class of models, and suggest a first-principle-based, high-throughput strategy to search for delicate topological materials.